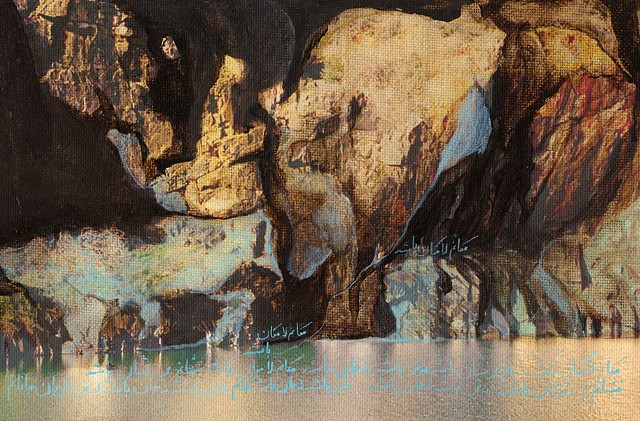 in the mid-thirteenth century the great persian mystic and poet Rumi focused through his poems and various other declarations on the necessity to seek the silence within, in order to unveil the mystery of the ‘other’ generated by our inevitable grapple with duality.

but what might constitute the ‘other’, and how does engaging with its unveiling affect a contemporary art practice?

Immanuel Kant defined a condition he terms ‘transcendental apperception’* as preceding all experience; ego seduces us into believing that the self is single and fixed, and this illusion is desperately held in place against all evidence that such a self exists.

consequently, according to Kant, the ‘other’ might be simply no more than one in a series of endless manifestations of the aggregate of experience we have come to define as self.

the Buddha was said to have discovered on the eve of his enlightenment not only the momentariness of the arisings of these various aggregates of experience, but the entire edifice of causality (the circular structure of the binding chain of habituality, each link unceasingly conditioned by each of the others) that constitutes the pattern of human life as a never-ending quest to anchor experience in a fixed and permanent self.

the shattering clarity of such an insight has a powerful attraction for those that seek illumination into the nature of being, and these are the individuals that most willingly move into an ongoing silence simply in order to experience the resultant contemplative states.

the residue of the journey through this space can at times be manifested as art, and this production might be read by an art audience as consisting of an interpretation of the various views that have been enjoyed along the way.

but such seekers inevitably attempt to describe through their work the substance of the transformative experience they have undergone; they are generally not interested in a view of the outer world, except perhaps as a ground upon which, more poignantly than ever, the paradox of duality can be encrypted.

the inner space that has contained the transformative experience shares the characteristics of a mandorla, the segment that occupies the common arc of two intersecting circles.

the potential integration of two separate entities constitutes, after all, the inner quest of the migrant, as well as that of the seeker of truth.

a mandorla though cannot be sought; it can only be found.

consequently the approach to preparing oneself for its sudden unveiling is all-important.

Layli Rakhsha is both migrant and seeker; she sits in the midst of the west australian wilderness and whispers the lines of a Rumi poem in Persian, whilst writing those lines in lapis lazuli on printed images of the landscape that surrounds her.

perhaps the persian desert whose vastness Rumi sought and the western australian bush that now surrounds Rakhsha share the unique condition required to engage with such quests.

they both constitute a kind of vast and timeless ocean, where the inner seed that first urges the seeker to dive into the irrational finds sympathetically fertile soil in which to bloom.

consequently more than surrounded by the desert Rakhsha is immersed in it, as if she is underwater, as if she is the very diver Rumi refers to in his poem titled ‘the diver’s clothes lying empty’, as if she, like the diver, is also attempting to reach the ‘sad edge of no shore’, the edge that defines both ethereal boundaries of absence and the flesh-and-bone of presence.

Rakhsha’s images are above all produced through faith, where a particular consciousness must precede action, and where as a corollary the visible world is continually manifesting itself anew.

on seeing these images we witness a presence filling a space that is not-yet-here; a presence that will very slowly crystallize in a future we can never reach.

if we are able to approach each image, each whisper, in the spirit through which it was ‘birthed’ it might then begin to suck all extraneous sound from the space it inhabits, and consequently flood us with its silence.

we might at that very moment be initiated into our own journey.

in Rumi’s own words:

whence have i come, and why this coming here? where i must go, when will my home to me be shown? where is that ear that can hear my speech and song? domenico de clario monash university september 2006 *Consciousness of self according to the determinations of our state in inner perception is merely empirical, and always changing. No fixed and abiding self can present itself in this flux of inner appearances... [Thus] there must be a condition which precedes all experience, and which makes experience itself possible...this pure original unchangeable consciousness I shall name transcendental apperception.